Grey Gowder is an Emmy-nominated and award-winning filmmaker from Charleston, South Carolina.

Among the film projects he currently has in production is an environmental adventure documentary called Sea Change – that he’s both directing and producing. We sat down with Grey to learn more about the Sea Change documentary effort, and to hear about his own journey to become a filmmaker.

In our last episode of The Way Out There we talked with Zach Bjur and Tripp Brower before they departed on their 2-year Apparent Winds voyage….which is the adventure Sea Change will document. While part of the conversation with Grey builds from that previous show, you don’t have to listen to the previous episode first. The two conversations work together in either order.

We sat down with Grey before the Coronavirus pandemic hit, so it’s safe to say some of the thinking around film production schedules and topics will evolve going forward. Follow Grey and the Sea Change/Apparent Winds channels and they will keep you up-to-date on all changes. 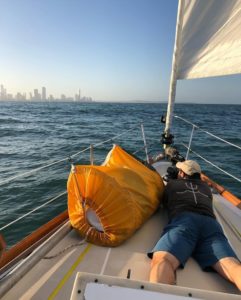